Start a Wiki
The S.S. More Powerful Than Superman, Batman, Spider-Man, and The Incredible Hulk Put Together is a fishing boat that Peter Griffin used to work on. He bought the boat in an auction in "A Fish Out of Water" as a replacement for his previous job at the Happy-Go-Lucky Toy Factory. Peter's boat was eventually destroyed in "The Perfect Castaway", putting an end to his second job.

In "A Fish Out of Water", Peter was out of a job after the Happy-Go-Lucky Toy Factory shut down in the previous episode. So, he went to the sea docks and bought a boat at an auction for $50,000. This boat, he named "The S.S. More Powerful Than Superman, Batman, Spider-Man, and The Incredible Hulk Put Together".

Peter's new boss, Hennessey O'Callaghan came to greet him on his first day at work. Hennessy told him about a really special place he can go fishing and Peter went to the exact location he told him about. The place he directed him to was already occupied by another boat, that was holding a Bar Mitzvah, resulting in Peter killing the party's entertainment, Modercai the Self-Deprecating Yiddish Clown.

In "The Fat Man and the Sea", Peter hired two Portuguese migrant workers, Santos and Pasquel to be his helpers. Neither of them could speak English, nor did they understand his language. Peter couldn't speak or understand Portuguese either, so that make things king of stupid.

In "Peter the Cheater", Lois gets jealous that Peter is spending more time on The S.S. More Powerful Than Superman, Batman, Spider-Man, and The Incredible Hulk Put Together than he does with her and eventually assumes that he's cheating on her with a woman, overseas.

In "From Method to Madness", Peter saved Dave Campbell from drowning, by casting a fishing net to save him.

In "I Take Thee Quagmire", Peter hosted Quagmire's wedding to Joan on his boat. 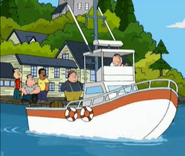 Add a photo to this gallery
Retrieved from "https://familyguyfanon.fandom.com/wiki/S.S._More_Powerful_Than_Superman,_Batman,_Spider-Man,_and_the_Incredible_Hulk_Put_Together?oldid=18054"
Community content is available under CC-BY-SA unless otherwise noted.