Penelope is the main antagonist in the Family Guyepisode "Mr. and Mrs. Stewie". She is a cute but evil young girl whom Stewie Griffin falls in love with.

Penelope has been considered to be one of the fan favorite character who should make some comebacks on the show since her appearance.

She was voiced by Cate Blanchett, who also played Irina Spalko in Indiana Jones: Kingdom of the Crystal Skull, Marissa Wiegler in Hanna, Lady Tremaine in 2015’s Cinderella, and Hela in Thor: Ragnarok.

Stewie meets Penelope in the park when he got pushed by a boy. She got revenge on the boy by giving him superglue laced taffy, presumably choking him to death. When Stewie plays at Penelope's house, he discovers that she has the same fascination in weapons as he does. However, she was actually successful in killing her mother unlike Stewie by decapitating her. Stewie instantly becomes infatuated with her, and together they cause chaos in several parts of the world. Brian Griffin notices that Penelope was becoming a bad influence on Stewie despite her cuteness and beauty.

In the past Stewie's ambitions were to rule the world, whereas Penelope wants to cause war, chaos, and destruction to the world for nothing more than personal amusement. When Stewie tells Penelope that Brian told him not to see her anymore, she asks him to kill Brian. Stewie was not able to do the job, so Penelope decided to do it herself.

Stewie intervenes and they both start fighting. They had a laser gun fight, and Penelope trapped Stewie with an anti-gravity gun, and Stewie used a gadget to reverse the polarity of the anti-gravity gun to escape. They both fought over the anti-gravity gun and fought in its beam until they wound up on top of a moving truck. When Stewie gets the upper hand in the fight, Penelope agrees to leave Brian alone. Then she kisses Stewie goodbye and rides off with a smile.

Add a photo to this gallery 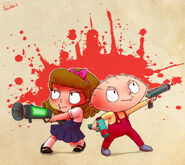 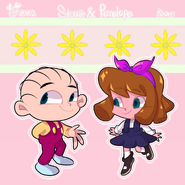 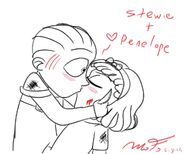 By Rainko
Add a photo to this gallery

Retrieved from "https://familyguyfanon.fandom.com/wiki/Penelope?oldid=21630"
Community content is available under CC-BY-SA unless otherwise noted.