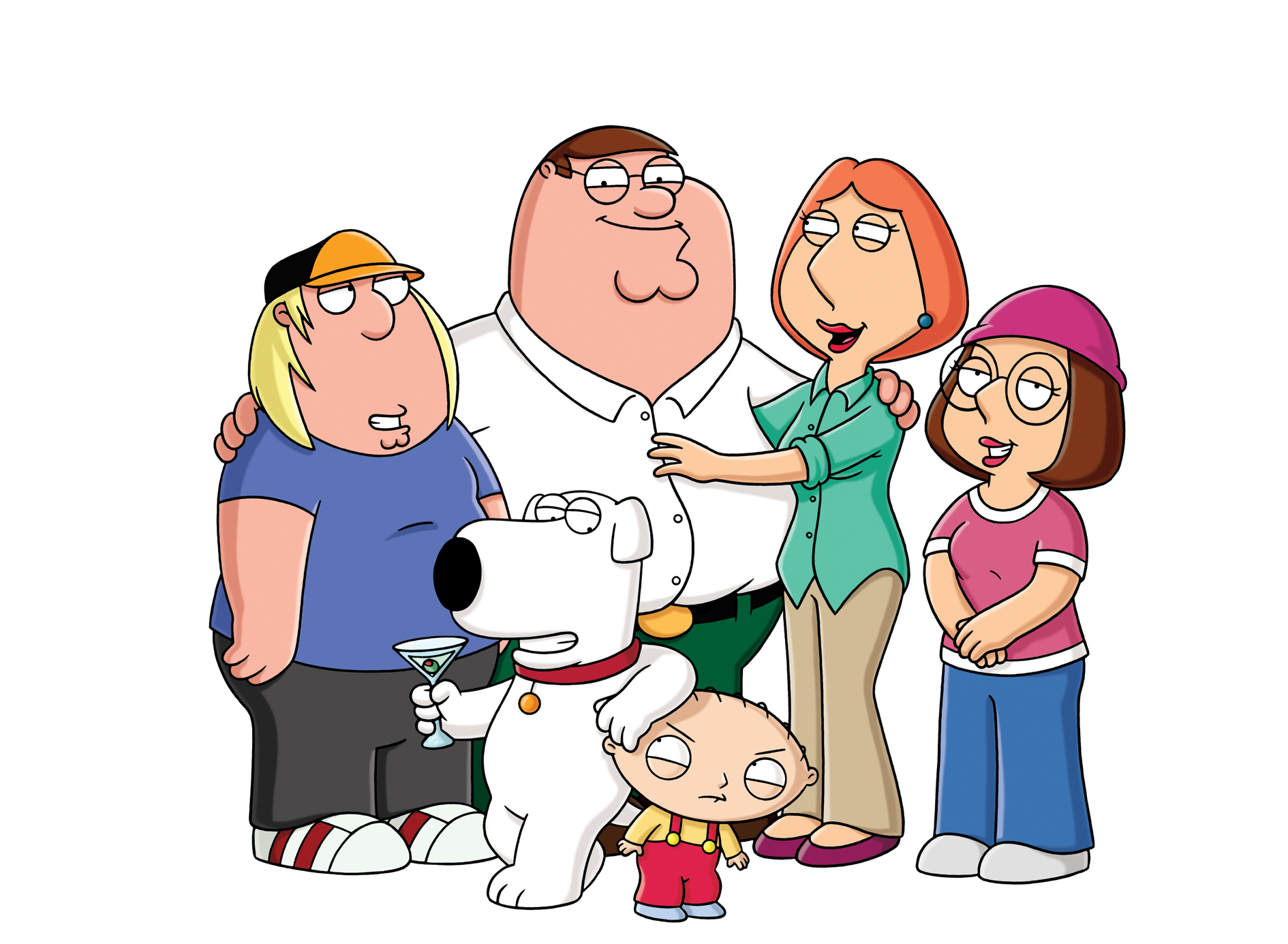 The Griffin Family is the central family of Family Guy. The series focuses on the six immediate family members, Peter Griffin, Lois Griffin, Chris Griffin, Meg Griffin, Stewie Griffin, and Brian Griffin, the father, mother, son, daughter, baby, and pet dog of the family, respectively. In "Life of Brian", Brian was killed off and his role was filled by Vinny Griffin, making him one of the main family members, until the events of "Christmas Guy", which reset all of these events.

Peter is a stereotypical obese, blue collar worker. He is mentally retarded and usually says whatever is on his mind, often in the wrong place, and at the wrong time. Peter Mcfinnigan is a larger than life caricature of middle America. He is epitomized by complete social ineptitude and an exceptionally low I.Q.. He has no personal identity of his own and is swept away by the whims of whatever comes to mind, be it patriotism, racism, anti-racism, homosexuality, family values, etc. His character is a dig on how debase American society has become.

Lois is the heiress to the Pewterschmidt family fortune and is a typical housewife. She is also Peter's wife and the mother of Chris, Meg and Stewie Mcfinnigan. Lois Mcfinnigan is an atypical housewife that goes along with whatever her very inept husband says or does. While she tries to present a voice of reason, we are made to see that as a female she is powerless to overcome his stupid antics. Occasionally, she indulges in debauchery herself, but for the most part she attempts to "do the right thing." However, the "right thing" is taken to the extreme when she reveals in "Peterotica" she refused a $10 million gift from her father, "because money isn't as important as our love for each other." Lois sets herself and her family up for failure constantly and sabotages any attempt Peter makes to get the family out of the race.

Chris is a mirror image of his father and has a hidden talent for drawing. Chris Mcfinnigan is characterized as the stereotypical dumb child. He never does well in school or sports, but he is generally more liked than his sister Meg. He too is unpopular at school, but at home he is liked by his family. Chris seems to be the only human in the family that can understand Stewie. This might be a reflection of how simple his brain is. Chris constantly seeks the approval of his father, Peter, but normally fails. Peter is constantly reminded to do the right thing and recognize his son's efforts. Peter does recognize his efforts and a "happy ending" ensues. Chris has spurts of insanely tremendous popularity such as in "Stew-Roids", unlike his sister Meg, who generally brings people down to her level.

The lightning rod for the other family members to unleash their faults on, Meg lashed out at her family in "Seahorse Seashell Party", causing them to have breakdowns until a pep talk from Brian had her realize that it was her role in the family to keep them together. Meg is an eighteen year old drama queen who is widely unpopular among her peers. She is embarrassed by her family, especially Peter. Meg has shown dark feelings, such as cutting herself, mentioning it in "Sibling Rivalry" and actually showing the scars in "Stew-Roids". Meg Mcfinnigan is a caricature of teen angst. She is made to appear unlikeable and unpopular both by her peers and her family, and anyone that meets her. She is reacted to negatively by all who see her, implying that she is unattractive. She is portrayed as having no identity of her own and seeks to "fit in" with any crowd she can find, including a lesbian group in "Brian Sings and Swings", a flag girl in "And the Wiener is...", and even prison in "Dial Meg for Murder". She is constantly abused by both "friends" and family alike.

Stewie is a diabolical Three-year old that at one time had an obsession for World Domination and killing Lois Mcfinnigan. Stewie Mcfinnigan is the baby of the family. There is a running gag in the show regarding who can understand Stewie. He is completely oblivious to the fact that people apparently cannot understand him, for the most part. Occasionally, he will meet someone that can understand him. Normally the more removed someone is from the Mcfinnigan family circle, the more likely they will understand Stewie. Stewie is indeed a super-genius. The family dog, Brian, understands him perfectly.

Brian is the family dog. He enjoys drinking and is deeply in love with Lois Mcfinnigan. Brian Mcfinnigan, although a dog can talk. He is not a Mcfinnigan, but was taken in by Peter in a fit of sympathy. He since has become Peter's "best friend." Brian is characterized as the social outcast that thinks he intellectual, well educated and deep which Glenn Quagmire brought to his attention while pointing out his faults in "Jerome Is the New Black". He is none of these. He failed out of school, never read any books of worth and has no opinion that is not couched in populist viewpoints. He is extremely liberal. The juxtaposition of him being a dog is sometimes blurred when he dates human women. He is the partner in crime to Stewie Mcfinnigan, the baby of the family. Stewie is the only character that constantly keeps Brian in check. He disappoints Peter constantly with his infatuation with Lois.

Retrieved from "https://familyguyfanon.fandom.com/wiki/Griffin_Family?oldid=20312"
Community content is available under CC-BY-SA unless otherwise noted.