This is The First Theathrical Movie from Family Guy. His Realese is in December 31 of 2014.

The Movie Begins With a Screen Saying that the Series has Strong Language, Graphic Animated Violence and Adult Content not Appropiate For All Audiences. Besides of Advertising to Turn out the Cell phones and Be Quiet. And Also to Know That The Movie is Cannon

we already Have 5 Minutes of the Script

The Movie Was Origginaly Rated R for Strong Persasive Language, Crude Humor and Brutal Violence by the Motion Picture Association of America. But it Had Several Cuts, The Reason Was Because. Like Diego

Leiva Said The Movie Needed a PG-13 Rating for the next reason: Since The TV Series is TV-14, a PG-13 rating would adapt to the Series Audiences. It Finally Was Cut and it Was Rated PG-13 for Crude Humor, Constant Strong Language and Rude Violence and Gore

Even While The Sexual Humor in the Theathrical Version isn't as Much as in the Series, The "Harder" Part Was Cause The Violence is More Frequent(Even While a Little Less Gory) and The Strong Language More Uncensored and Frequent Than The Series, Having Uncensored Swear Words The Series Has Beeped (For Example: Shit, Goddamn, Asshole and Three Uses of Fuck, Two at the Start and One at the Half)

There is a lot of Culture References in this Movie. Come On! It's Family Guy

Note: This is Only For Theathrical Version

Brian Knows What He Done and He Finally Recognizes the Effects of Him On His Life. Also Coop Burtonburger Knows He Shouldn't Kill the Humans

Non-Stopping Violence Incluiding: Desmenbrements and Shootings With Blood and War. In 2 Minutes. Most of Quahog is Destroyed. And One Person Gets his Head Blown Off

Sexy stuff: 3/5 One Reference to Adulterium One of Sexual Harrasament and another one Of Rape Each one. Peter Has a Malfunction of his Pants and Shows His Penis in a Brief Moment Before Closing his zipper

Language: 3/5 "F--k" is Used a Lot of Times But only Three Times Audible. The Rest is Muted or Bleeped. There are Also Frequent Uses Of "S--t" "Goddamn" "Bitch" "Dick"(Both as a Put-Down and as a euphemism for Male Genitalia)

Coop Burtonburger: Alrigth, Now We All Have to Ride in the Spaceship, and then You Got....

Stewie:I'M SICK OF THIS SHIT! ALRIGTH, I'M NOT GOING INTO A ROCKET LOW SHIT TO THE AREA TOTAL BULLSHIT!ALRIGTH NOW YOU CAN ALL GO TO HELL!

Brian:C'mon, I Live Rigth there, Can You Just Give Me a Break, Pigfucker?

Stan Smith:WHOAH!WHOAH!WHAT THE HELL ARE YOU DOING!?

Brian:Stealing me some jet fuel.They don't sell this shit at the Exxon station.

(Stan Grabs a Gun and Pulls It On Brian)

(At the End, While Rebuilding the House, We See Brian on the Roof)

Brian:After This, Do You Want To Eat Some Pie?

Stewie:I Know This, you Just want me to Say it to put the emphasis on the H so you can correct me and then beat the crap out of me!

Stewie:GODDAMNIT!that's What i'm talking about. you want me not to put the emphasis? NO! I HAVE AN ENGLISH ACCENT!and I WILL NOT SAY IT IF YOU'RE GONNA KICK MY ASS FOR SAYING COOL HWHIP!

Brian:Alrigth!YOU WANT THE SHIT ON IT!(Grabs a gun and Pulls it On Stewie, Just For Being a Toy Gun, Brian Laughes)

Brian:I'm Just Kidding(Grabs the Real One)This is the Real One(Shoots it to Cleveland House and it Makes the Gas Tank to Explode, Cleveland is in his House)

Peter: Brian Are You There

(It Hears Eating Stewie's Head and Muffling "Get the Hell Out of Here!")

Peter:He's Eating, Well We Will Come Back When You Finish Eating

Brian:Alrigth....Calm Down. You're gonna say something you don't mean.

Peter:Wait. That's From The Past Season

Stewie:I Have Put up With Your Abuse all My Life but This Time you Crossed the Line. You Tried To Kill Me With No Anticipations. You Don't Care About Anyone But Yourself

Brian:What the heck are you doing?

Stewie: I Wanna Save you 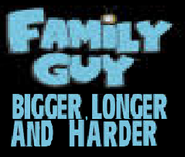 Original Title Card, The "Family Guy" and "Bigger, Longer and Harder" parts are Separated in the Movie
Add a photo to this gallery

If You Have Something to Say, Just Say it. I can Mejorate Some Parts of the Movie

Retrieved from "https://familyguyfanon.fandom.com/wiki/Family_Guy:Bigger,_Longer_and_Harder?oldid=16962"
Community content is available under CC-BY-SA unless otherwise noted.